Mid-march in Pennsylvania.  We are usually stoking the fire and shoveling the last, and often largest, snow of the year.  This year, the groundhog got it all wrong.  March came in like a lamb and looks to stay that way.  A week of temps in the low 70's had crocus blooming, grass greening, and carp cruising the shallows in local ponds and creeks.  There are so many spring chores to undertake around the house and farm, that it was impossible to know where to begin...so we went fishing. 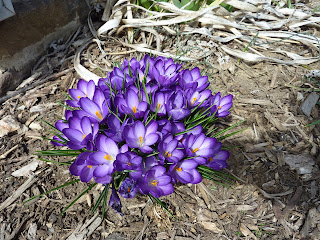 With his seven year old sister otherwise occupied with softball and Girl Scouts, my youngest fishing buddy and I headed for the nearest farm pond, where we were able to trick one respectable female largemouth into inhaling our jig.  The first cruising carp of the year were spotted and we agreed to return soon with the fly rod.

The next day I remembered a trout fishing buddy had clued me into some potentially good carp water on a small creek near home.  After a nice visit with the landowners, we had made some new friends, had a new place to fish and had seen several tailing carp.  A couple days later, with only a half-hour to fish, we returned with fly rod in hand.

In short order, we had located three tailing fish.  Knocking the rust off the casting arm, the third cast was a charm.  The carp turned on the small crayfish fly, gave the tell-tale dip of the head and a quick strip set had the fly firmly embedded in its soft mouth.  After a short but exciting game of tug-of- war, Henry took over the rod as I ran downstream to see where we had left the net.  Teamwork paid off and soon we had our first carp of the year to admire - not the largest, but a great fish to start with. We were batting 1.000 - I briefly considered taking the rest of the year off to maintain a perfect season...nah.

We headed to bigger water on Sunday and took our first float trip of the year.  It took 3.5 hours to float 7.5 miles of the Raystown Branch of the Juniata River.  The water was slightly discolored due to recent showers upstream, but we still spotted several large carp cruising and/or feeding.  Water temps were in the low 50's and I didn't want to hold up the rest of the family in their kayaks, so I hesitated to jump out of the canoe to take a shot at the couple tailers we did see, though I'm already kicking myself .  We'll give them another week or so get active.  We did manage to boat one modest smallmouth and lost a great battle with a small muskie on 8 lb. mono and a suspending jerkbait.

On Sunday evening I had a chance to sit down and reflect on the weekend, and, while many chores were left undone, a few great memories were made, and the family is united in anticipation of a great summer ahead.
Posted by Scott in PA at 8:48 AM