Spring has sprung, and so has the carp fishing in central PA...

With spring as busy as usual, there has been precious little time to hit the streams, rivers and lakes here in my rural part of the Ridge and Valley region.  The itch to fish was beginning to get the better of me when, about 10 days ago, I was passing by a farm that is home to one of my favorite carp honey holes.  I only had a 5 wt. fly outfit in the truck, but I did have some carp flies, and there was storm front moving in, so I thought perhaps the carp would be feeding.

They were feeding, alright.  In fact, one carp was so eager to eat that I watched him move more than 18 inches to devour my crayfish fly.  30 minutes later, I had enjoyed two great tussles with healthy carp, and the rain was bearing down.  There were a couple larger specimens, but I couldn't get the fly in front of them.  That may have been for the best, as I suspect they might have converted my 4 piece, 5wt. to a 6 piece, paper weight. 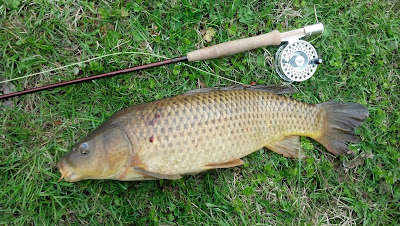 That brief outing satisfied the fishing itch for a week or so, but soon enough, I felt the need to break out the canoe and look for some bigger fish in bigger water.  With my capable first mate in tow, the canoe was loaded in the truck and we headed for a nearby lake where carp were known to be numerous and of good size.

Unfortunately, the shallow flats were discolored due to wind, feeding fish, or both.  Carp could be found, but usually as the canoe passed over, or very near, the fish.  A couple feeding fish were spotted in time to muster a cast, but a waving rod, or ill placed piece of woody debris, foiled my limited attempts.

After two hours of poling and blind casting, it was just about time to head back to the truck...the first mate had a friend's birthday party to attend and we weren't to be late...when a couple larger fish were spotted feeding in the shallows along a flooded road bed. The wind picked up considerably, making boat placement difficult, but the trolling motor did it's job, and a few reasonable casts were taken.

In the cloudy water a take was difficult to discern, but with approximately the right amount of leader between the fly line and the fish, and a telltail wiggle, a firm strip set resulted in the kind of golden roll that flycarpers live for.

Line flew through the guides as if we'd hooked a trophy permit.  As the behemoth made several long runs and generally had its way with the canoe, a timely arrival at the aforementioned birthday party seemed unlikely.  With time of the essence, I played the fish as hard as my inexpensive 7 wt. rod would allow.  Just shy of 20 minutes later, the carp was boatside and I snapped a quick picture, explaining to the first mate that we probably weren't going to bring this fish into the canoe.

Sidebar:  15 years ago, I had a bad experience along the coast of southeast Alaska with a small skiff and a large halibut.  Another greenhorn and I had just boated a decent 60 lb. halibut (How were we supposed to know you were to shoot 'em and tow 'em home?) Had it not been for the hammer we found under the seat in that boat, and several rounds of slimy hand to fin combat, my friend and I might not have lived to tell the tale.

I have been leery of loose fish in tight places ever since.

The "Large" Measure Net I carry in the canoe is capable of measuring a 28" fish - gloriously inadequate. 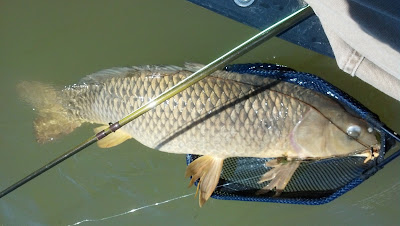 I knew the fish had plenty of strength left, but miraculously, it surrendered with dignity, and lay perfectly still as I lifted it aboard for a quick cell phone picture and a smooth release.  Unfortunately I had left my 50 lb. scale in the truck, although, without a larger net or weighing bag (which I will be acquiring), I don't think I could have managed the weigh in.

Icing on the cake:  Made the birthday party on time