Being relatively new to the fly-carpin' game, preferring to travel light, and prone to wandering rivers on foot, I haven't found a net set up for wading that I like, but I admit a net is a good idea.  I'm very intrigued by Mr. P's recent article "Nettin' Carp Like a Gunslinger".

I'm an advocate of landing a fish before it is entirely exhausted and I do my very best to handle fish gently, and quickly, before releasing them.  Additionally, I like any excuse to buy another piece of fishing tackle.  For those reasons, I'm likely to soon acquire a net for fly-carpin' on foot.  In the current absence of a net I am having good luck using The Fish Grip, a tool that I find to be head and shoulders above the better known, and more expensive, Boga Grip. 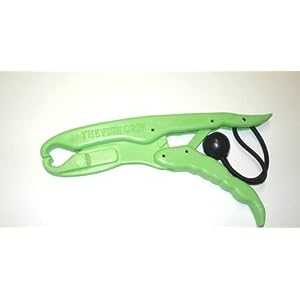 The locking mechanism of the Fish Grip is more like a Vise Grip than a Boga Grip and, with its smooth jaws, the Fish Grip can be pinched behind the front or corner of the a carp's bugle like mouth to more gently, and securely, hold the fish, in the water, while a hook is removed or a picture is taken.  The Boga Grip has a built in IGFA certified scale, but a carp needn't, and shouldn't, be lifted by the lips, so the scale isn't a plus to me, at least with carp.

Both Grips are made in the USA.

The Boga The Boga Grip does have a pivoting head which, sellers emphasize, allows fish to be revived in the water.  I suppose a pivoting head would have some advantages, but I've never had any trouble reviving a fish with the Fish Grip, and I have seen several complaints that the Boga's pivoting head results in some tremendous line tangles when trying to land and unhook large feisty specimens.

One of the best features of the Fish Grip is the extra safety factor afforded when removing treble hooks, and the fact that kids can use it when removing hooks or posing for that fishy shot with panfish or bass.


Give the Fish Grip a shot and let me know if you're as happy with it as I am.
Posted by Scott in PA at 5:18 AM