Headed for the river early Sunday morning after a bit of a hiatus for work and family activities, including some time at the beach.  Sitting on the beach is relaxing...to a point, but upon my return to the real world with one day to catch up on all those post vacation chores, I woke up with the sun and headed for the river, for my kind of relaxation.


Signals were mixed as I worked my way across the growing gravel bar.  Two weeks of searing heat and sparse rain showers had the river shrinking rapidly.  It was obvious carp were, or at least had been, present, but it appeared as though one carp refused to move to deeper water, and had paid the ultimate price.  Of  course appearances can be deceiving, but I believe some carp may be stubborn enough to allow that to happen.

Carp were not tailing in the skinny water as they had been at this spot in years past, but as I reached the long deep pool below the skinny water, I began to see carp, some large, cruising in groups of 3-6.  After a painful number of refusals, I took the hint and changed flies.  The small conehead olive wooly bugger I tied on more closely matched the color of the river water and, almost immediately the fly was getting more attention - mainly from the small smallmouth and rock bass abundant in the river, but soon enough a group of cruising carp took notice of these small eager fish fighting over this apparently tasty morsel.  The biggest bruiser in the bunch decided to beat her buddies to the treat and gobbled down the fly with such gusto that I nearly forgot to set the hook.  Nearly. 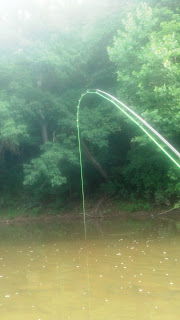 After 10-15 minutes (time flies when you're having fun) and one long run into my backing, the brute was brought to hand.

The Release - almost as satisfying as the take

Can't wait to get out and try for some more.  A family trip to Maine, to visit relatives and Acadia National Park, will keep me off the river for a  bit, but will hopefully afford some good bass fishing as well.